I was first called to design this garden during the early stages of the house build. It is a large town block with a huge water catchment above it. This emerging house and block was being washed over each time there was a rainfall event!

The challenge was to create a design that was attractive but could also divert the water around the perimeter and release it back to the storm water drains below.

I created a sculptured lawn with rolling mounds and lows which allowed me to build in a much needed swail but disguise it as lawn, rather than a drain.

In the back yard a dry creek bed appears from around the house and wriggles its way naturally down to the storm water drains. So what looks like a decorative feature is infact diverting unwanted water off the property.

A tributary of the dry creek winds its way back to the house and over the septic lid and its risers and inspection lids that had been installed front and centre of the large living room windows.  Eye-sore gone!

In the centre of the house lies a courtyard that is looked upon by both the living rooms and the bedrooms. As very little foot traffic passes through the garden, an opportunity arose to create a ‘picture garden’ – a garden to look at but not need to visit

The area is topped with rounded glossy black rocks that contrast with mudstone steppers that lead your eye through the garden. Ground cover make their way over boulders while three Coral Bark Maple dapple the sunlights into the courtyard while blocking out the outer-garden and the neighbour's garage wall. This allows your eye to rest within the garden and give intimacy to the surrounding rooms. 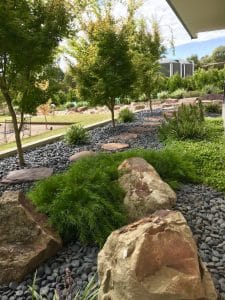 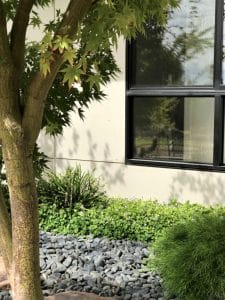 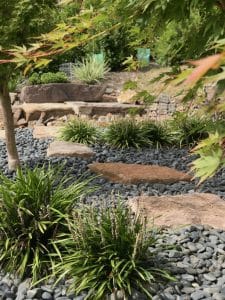 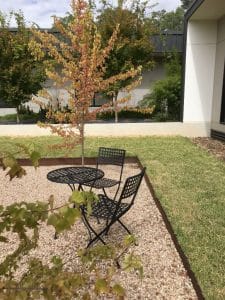 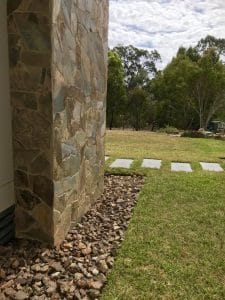 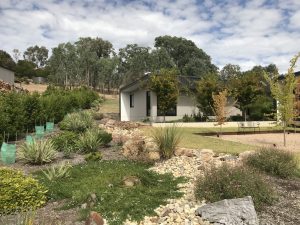